AB6WM Stereogram QSL Card. Hidden in the picture are a 3 element quad and an inverted V dipole. To get a real one all you have to do is work me in a contest and send me your card with an SASE.

C31LJ QSL cards are available from my QSL manager: Nenad, VE3EXY direct or via the bureau. Most of my operating in Andorra is done mobile on the mountaintop where conditions are better.

I operate as VE3SUN in Canada during the summer months from our QTH on Fairy Lake Island (ON-261). You can usually catch me in the IARU contest. 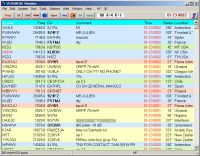 In 1902, Rudyard Kipling wrote a short story called Wireless which was published in Scribner's Magazine.

If you have ever wondered what it would have been like to have lived around the time that Marconi was performing his first experiments with wireless and the coherer was the state of the art detector, you should read this fascinating account of a stormy night and an experiment with Hertzian waves.

It's a funny thing, this Marconi business, isn’t it?’ said Mr. Shaynor, coughing heavily. ‘Nothing seems to make any difference, by what they tell me—storms, hills, or anything; but if that’s true we shall know before morning.’

‘He’s had to go to bed on account of his influenza. He said you’d very likely drop in.’

‘Inside, getting the things ready. He told me that the last time they experimented they put the pole on the roof of one of the big hotels here, and the batteries electrified all the water-supply, and’—he giggled—‘the ladies got shocks when they took their baths.’

Published in September, 2010, Tom McCarthy’s C is a fascinating and spell-binding account of Serge Carrefax, who is home schooled along with his brilliant sister Sophie in the early 1900s. His inventor father runs a school for the deaf and spends his time experimenting with wires and telegraphy. Serge is bitten by the radio bug at an early age and the theme of radio communications, antennas and communications history pervade this book.

Tonight, as on most nights, he starts out local, sweeping from two hundred and fifty to four hundred metres. It's the usual traffic: CQ signals from experimental wireless stations in Masedown and Eliry, tapping out their call signs and then slipping into Q-code once another bug's responded. They exchange signal quality reports, compare equipment, enquire about variations in the weather and degrees of atmospheric interference. The sequence QTC, which Serge, like any other Wireless World subscriber, knows means "Have you anything to transmit?", is usually met with" a short, negative burst before both questioner and responder move on to fish for other signals. Serge used to answer all CQs, noting each station's details in his call-book; lately, though, he's become more selective in the signals he'll acknowledge, preferring to let the small-fry click away as background chatter, only picking up the pencil to transcribe the dots and dashes when their basic QRNs and QRAs unfold into longer sequences. This is happening right now: an RXer in Lydium who calls himself "Wireworm" is tapping out his thoughts about the Postmaster General's plans to charge one guinea per station for all amateurs.